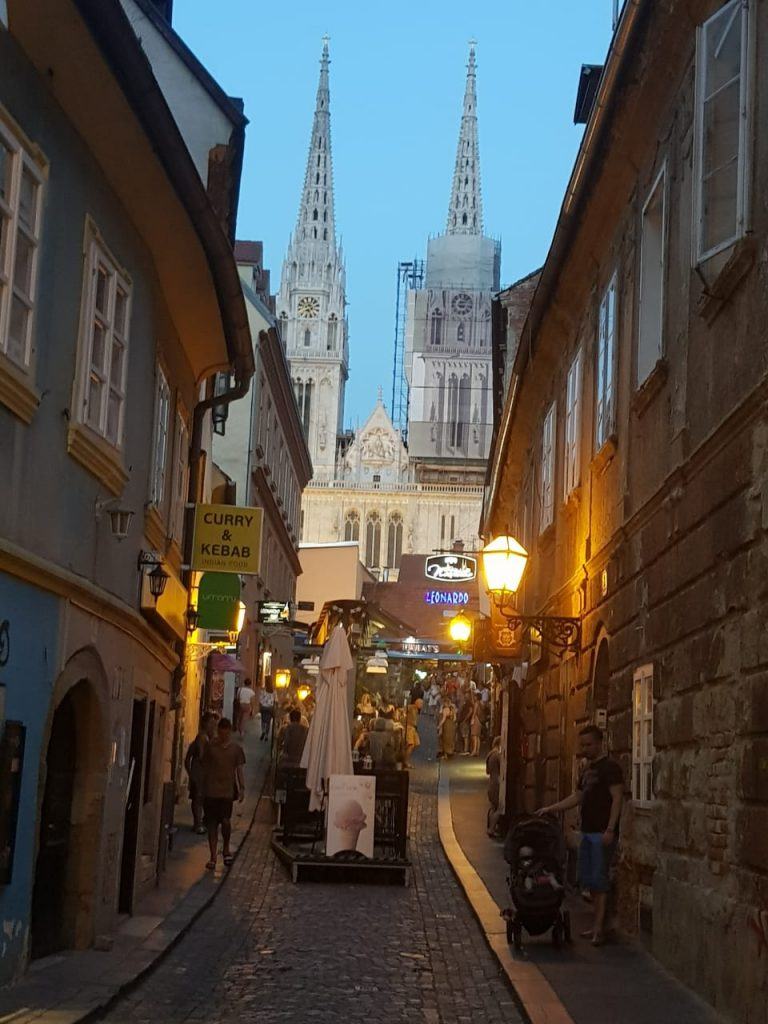 Zagreb offers tourists many diverse options. Your itinerary will depend on the age of your children as well as your family’s interests. We spent 2 nights there and these are the places that we were enjoyed exploring.

• Zagreb is the capital of Croatia. It is quiet in the summer as Croats like to go to the sea for summer holidays. This makes it easier to explore with children.
• A historical and cultural walking tour of the old town, with an English speaking guide is recommended – 2hrs with kids and preferably early morning or late afternoon as it is very hot. Take hats, insect repellant, suntan lotion, water bottles and comfortable shoes, plus snacks from breakfast or a local super market.
• If you do historical and cultural exploring, break it with an ice cream, lunch or visit the parks near the old town for a break.
• With younger kids, try to book transport such as Uber to the areas of interest. Older kids will enjoy scooters or bikes if there is not too much traffic. Alternatively, book accommodation in easy walking distance. Try to cut out too much walking that can be taxing for children.
• Ask advice from your hotel concierge or Google where activities/sites are in relation to each other. Try to plan your touring in specific areas.
• Tell or show your children on electronic media, some idea of what they will see and the importance of it. Google interesting facts particularly for historical places. This helps them to appreciate what they are seeing.

1. See the Baska Tablet in the Croatian Academy of Sciences and Arts. It dates from about 1100 and is written in Croatian Glagolitic. It is 13 lines and has been carved into white limestone. It tells how the Croatian king Zvonimir donated a piece of land to the church. The writing looks like symbols and shows children how writing and language has developed.
2. Visit The Palace Hotel which is 111 years old. During refurbishments, a time capsule from 150 years ago was found in its foundations. It was a glass and copper container, with items such as newspapers and coins. It inspires great conversations as to what you and your kids would choose to put in a time capsule today.
3. Go to Gornji Grad – Zagreb’s Upper Town. It is a historical neighbourhood with landmarks such as the Zagreb Cathedral in Kaptol Square. It is the tallest building in Croatia and its twin spires can be seen around the city.
4. Walk to Stone Gate nearby which dates to the 13 century and leads to the medieval town. It showcases a portrait of the Virgin Mary and child, that survived a devastating fire in 1731, without any damage.  Thus it has become a shrine where people come to pray in the hope of being blessed with their own miracles.
5. The Church of St. Mark is also nearby and worth a climb to see its colourful ceramic roof tiles and Croatian coats of arms. It is built in a square where the Croatian Parliament is also housed. The square was historically used as a place of public punishment, demonstrating to its people the terrible repercussions for breaking the law. Gas lighting can be seen around this square and is still lit manually every night.
6. Stop at the Croatian Museum of Naive Art, near St. Mark Church. It showcases unique and distinctive Croatian and some international artists of the 20 century. The interesting styles of the works and small size of the gallery should hold a child’s interest.
7. Visit the beautiful Tkalciceva Street – a pedestrian street of cafes, restaurants and shops. Coffee is like a religion in Croatia and locals spend time sharing this ritual with friends and family. It is particularly festive and lit up at night and good for souvenir and traditional shopping.
8. The unique concept of the Museum of Broken relationships was created by a divorced couple. The idea was to create a museum that housed items representing broken relationships of love. It has grown into a global phenomenon with people from all around the world donating objects. It is interesting to read all the stories, some funny and sad, and to see the quirky or everyday objects that represent these broken relationships.
9. The Lotrscak Tower was built in the 13th century to protect the southern city gate. Climb the steps for stunning panoramic views of the city. The Groc Cannon is also fired every day at noon from this tower.
10. Near the tower, take the Zagreb Funicular for an easy way to go up to or down from the Upper Town. It is the oldest and shortest funicular in the world and is still in good working order.
11. Walk through the Gric Tunnel that has become a tourist attraction. It offers a shortcut around the city and cool respite from heat. It was built during World War 2 as a bomb shelter under the city centre. It has held raves and cultural events in recent years.
12. The Museum of Illusions is a must with kids. It is very interactive and enjoyable. Families can interact with the exhibits and experience illusions with mirrors, graphics, drawings and in designated rooms.
13. The Zagreb Eye Observation Deck is on the 16th floor of a skyscraper in the centre of Zagreb. It also offers panoramic views of important city landmarks.
14. Hop onto a Blue Tram and see other parts of the city.