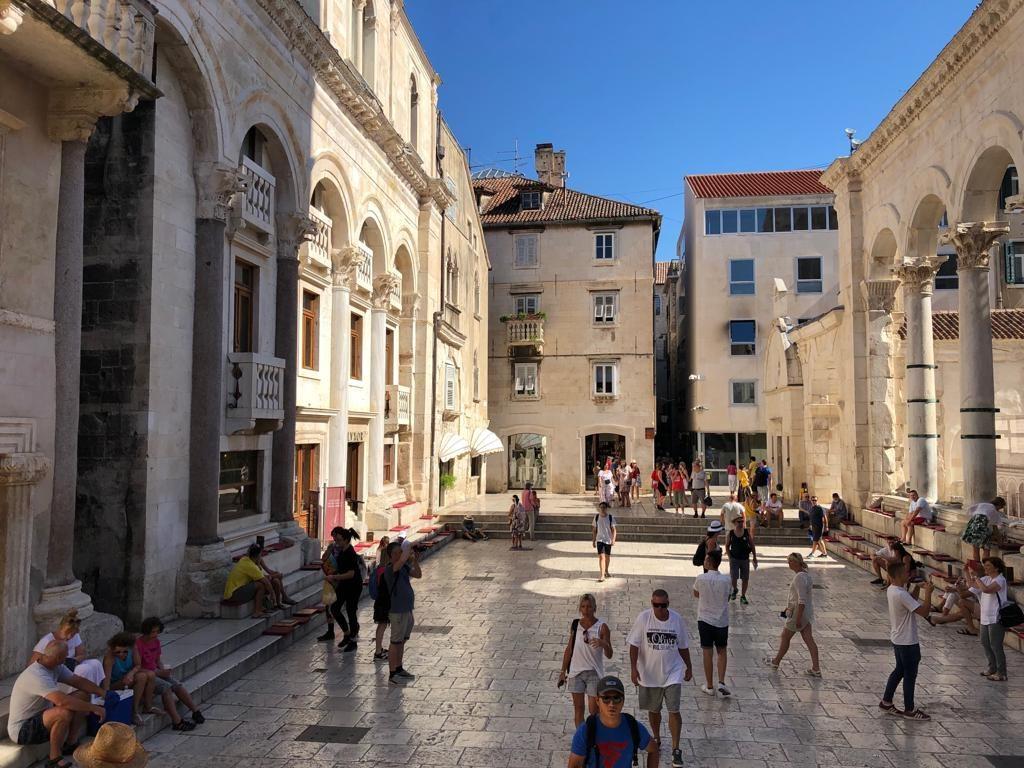 Try to spend more time at Split. It is Croatia’s second largest city and the largest city of the Dalmatia region. Sight see early morning or late afternoon, to avoid the crowds and summer heat. Break the midday heat with a swim in a hotel pool or the beach, if there is some shade. There are also many visiting ‘Games of Thrones’ fans here, as scenes from the series were filmed at this location. Interestingly, there are dedicated tours following its filming locations around Croatia. Besides this draw card, Split has a variety of tourist attractions on offer and its old town is a UNESCO World Heritage site.

Things to do in Split:

1. Go to the Riva Waterfront. The promenade has beautiful palm-tree-lined walkways, cafes and restaurants. Grab a beverage before or after your exploration of the old town.
2. Take a guided walking tour to the Roman Palace built for Roman Emperor Diocletian. Slaves from around the globe built this palace for his retirement and no expense was spared.  The old sewerage systems as well as food, olive oil and wine storage rooms can be viewed in the underground basements or cellars under the palace. These basements were also used as dungeons to house the dragons in the Game of Thrones. The most visited attractions are Diocletian’s mausoleum inside the Cathedral of St. Dominus, the Temple of Jupiter used for baptism dating back to 305 AD and the Roman colonnaded courtyard in the heart of the palace. The palace is a symbol of decadent Roman occupation where the Emperor and court enjoyed unbelievable excess. The Romans occupied this region for 800 years and the palace was also used as a military garrison.
3. You may also hear Dalmatia A cappella singers during the summer months, adding to the classical ambience of the palace.
4. Outside the palace walls is the iconic monument to the medieval bishop Gregory of Nin. He was known for introducing the Croatian Language, replacing Latin, for Christian religious services. The giant statue is about 8.5 m tall and was made by Ivan Mestrovic in 1929. Children will enjoy the tradition of rubbing his big toe for good luck.
5. Look out for the gates to the palace, each of which was named after a different metal: namely gold, silver, bronze and iron.
6. Kids will love a chocolate tasting at Nadalina chocolatiers that won an award for making the biggest dark chocolate slab of 800kg. They hold a record with the Guinness Book of Records and even make a chocolate record that actually works!
7. Visit the Game of Thrones Museum and shop for great mementos. Sit in a replica of the Iron Throne for a photo (as long as you buy a souvenir).
8. Visit some local beaches such as Bacvice and Ovcice.

Things to do in Salona:

1. Visit the ancient Roman town of Salona, 5km north of Split. It was once the capital of the Roman province of Dalmatia. Some of its relics are in the Archaeological Museum in Split.
2. Once you enter the old city, there is a burial site of numerous sarcophagi although many have been opened and destroyed over time.
3. The Tusculum building built in 1898, by Monsignor Bulic, acted as a base for his archaeological work. Buy tickets for visiting the arcahelogical site there and look at the Roman –styled drawing room inside. It has displays of Bulic’s archaeological work and some of his tools and photographs can be viewed.
4. Although what is left of most of the city is really ruins of stones, remnants of walls, public baths and city gates – it provides a good idea of its size. This is where the city of Split developed from.
5. There are also remains of an amphitheatre – however many stones were historically taken by the Venetians to build in Venice.
6. The site is not as protected as it should be. Some locals have grown olive trees plantations over part of the ancient city, others have used the stone to build walls around their houses nearby and the archeological site is used by locals as a park with dogs! However, the ancient city has a wonderful tranquil feel and you can only wish that you could be transported back in time to see its former glory.

Things to do at Klis fortress:

1. About half an hour from Split, visit the old Klis fortress on the hill. It served as one of Dalmatia’s most important defensive strongholds for centuries.
2. Wear comfortable shoes, hats and sunscreen. We visited late afternoon which was a perfect time to view the fortress out of the heat, especially as it is a bit of a steep climb up. There were also less tourists.
3. It draws some Game of Throne Tourists as some scenes were filmed at the top of the hill. However the long ancient history here is even more fascinating. Try to go with a guide who can explain the hundreds of year’s stories of sieges, occupations, renovations and extensions – as well as assassinations and deaths. 2, 000 people could live in the city at a time and during a siege one part of the wall could move so that the inhabitants could secretly source food from the town below. Water was also never in short supply up there as there were cisterns built all over the fort. Kids may not be as interested in the history but there are stunning panaromic views of the city and a small museum of weapons that may grab their interest.

Things to do at Vranjaca caves:

1. If you have time and want a break from the madding crowds and historical sightseeing, visit the 65 million year Vranjaca caves. They do limit the number of visitors at a time, so book ahead and organise transport there. It is about a 40 minute drive to the caves but a great reprieve from the heat, as the temperature is about 15 degrees Celsius inside. The whole family will enjoy these stunning caves.
2. The caves were found in 1903 and have been looked after by the family that owns the property since then. They dazzle with colour and crystals. Kids will love the stalactites and stalagmites. The rocks look like sculptures and we enjoyed our own interpretations of the rock formations.

Things to do in Trogir:

1. Use Split as a base and visit the historic medieval town Trogir. It is situated on a small island between the Croatian mainland and the island of Čiovo. It is about 27 km west of Split. Organise transport such as going on a boat ferry or travel by road. Take a guide to explain the history of the town as it will be more meaningful.
2. Trogir has beautiful architecture, stunning sea views and palm trees.
3. The historic centre of Trogir is a UNESCO World Heritage Site due to its Venetian architecture. The island was developed by Venetian nobleman as an important trading point. They were extremely wealthy and commissioned great artists of the time to create architectural and artistic masterpieces.
4. The Cathedral of Saint Lawrence and bell tower is a highlight. Saint Lawrence was believed to be killed on a grill and is always in depicted in statues holding one. The cathedral doors themselves are magnificent and are ornately decorated with carved limestone. They depict months of the year related to the work carried out during those months, lions as guardians, apostles, Adam and Eve, as well as fables and legends of the time. The black Christ feature in the cathedral, with almost a pirate theme, is also unique.
5. In the sacristy of the cathedral, is the treasury, built in mid-15th century. It exhibits golden and silver objects, church vestments, precious written materials and even bones of important clergy. On the wall above, are the coats of arms of the bishops of Trogir.
6. The Kamerlengo Fortress, at the end of town, was built immediately by the Venetians after they conquered Trogir. It was built in the shape of an irregular trapezoid with four towers at its angles. Along the walls of the fortress, are guard patrols, with a wooden fence and handholds. The fortress has fantastic views and summer concerts, shows, and film productions are also held there.
7. Visit Pantan beach close to the town centre.